Using Supplements to Hack the Neurochemistry of Dreaming 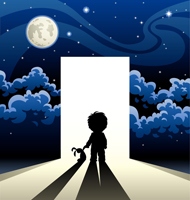 In a lucid dream, we are fully conscious and aware that we are dreaming —we experience an immersive virtual reality light years ahead of anything possible with today’s technology. Somewhere between 20 to 80 percent of the population (depending on the study) have stumbled into this realm spontaneously, unintentionally. But groups of experimentalists are industriously researching how to produce them at will. Their results and techniques have advanced considerably in the last several years, much further than the simple “keep a dream journal” and “ask yourself if you are dreaming during the day.”

The agile scientists of lucid dreaming are less concerned with building theories. Or securing funding. Instead, they are focused on leveraging emergent models of the mind and dream state to more immediate ends. Their peer reviews are forums, blogs and feed-streams. A community builds on what is shared, reports their experiences and modifies procedures to increase their effectiveness. These social networks are less controlled than a sleep lab, for example, trying to isolate a single variable. But they represent the iteration of hundreds of thousands of trials and the inventiveness of passionate researchers concentrating on results.

The Neurochemistry of Dreams

Stephen LaBerge is a pioneer in inducing lucid dreams. In 2004 he applied for a provisional patent for using supplements to raise acetylcholine levels, which he found to clinically improve the ability to lucid dream. It was an early foray into a fascinating area —facilitating lucid dreams through stimulating neurotransmitter balances. Agile scientist Thomas Yuschak and social networks of oneironauts took these initial discoveries and refined them into specific and highly effective protocols.

While these protocols use over the counter supplements and vitamins, you should determine for yourself the viability of this approach. If you elect to pass, no worries, we have other exciting options in future posts. The supplements in this protocol are widely used, and even beneficial for other ends, although some may require consideration in special cases. We’ll note these special cases, but we recommend reading Yuschak’s more in-depth material in the resources section if you have concerns or are interested in pursuing the nuances.

It seems odd, on first glance, that acetylcholine plays a key role in lucid dreaming. It is more typically associated with memory and learning. But the cholinergic neurons activated by this transmitter are nvolved in levels of wakefulness as well. This correlation was found in the 50’s where dreams were first associated with REM sleep. Acetylcholine levels diminish with age, this may explain why some people had lucid dreams when they were young, but haven’t had them since. But if we just raise the dial on acetylcholine levels, we’d be missing an essential key . . . timing. Before discussing the importance of this, lets explore how neurotransmitter levels are manipulated.

There are four primary ways to boost a specific neurotransmitter. You can introduce a precursor, or building block that’s used to synthesize the neurotransmitter. Often these are nutrients or supplements which require specific vitamins to complete the synthesis. You can use an agonist, which simulates the neurotransmitter, and creates a similar effect with the receptors designed to respond to this transmitter; agonists are most often chemical pharmaceuticals. An antagonist works in the reverse, blocking receptors which can trigger the brain to create more of the associated transmitter. Natural substances like Yohimbe work this way. Or you can inhibit the uptake, that is the breakdown of the neurotransmitter, allowing the body to create it faster than it is normally broken down. This is a popular strategy in the medical treatment of conditions like depression with MAO inhibitors which affect the re-uptake of serotonin (among other neurotransmitters.)

A powerful method to boost acetylcholine is through the use of galantamine (obtained from plant sources like the Voronov’s snowdrop or Red Spider Lily), which acts as a natural re-update inhibitor. Oddly, it also seems to work as an agonist as well, making it particularly effective. Galantamine’s effect peaks in about 60 minutes.

Since acetycholine levels are associated with wakefulness, as well as REM sleep, you don’t want to boost them immediately before going to bed. It will likely keep you awake and deprive you of the deep, early sleep cycles necessary for restoring the body. Optimal timing is to awaken 4-5 hours in, take 4 to 8 mg of galantamine and go back to sleep. And hang on for the ride. The acetylcholine boost in 60 minutes coincides with the onset of longer REM cycles in later sleep periods which extend 30 minutes and beyond. You can get galantamine supplements combined with choline (a precursor for acetycholine) for even better results.

Another natural substance that functions as a re-uptake inhibitor is a Chinese medicine with a long history called Huperzine A (an extract from firmoss.) 200mcg is the recommended dosage for it. Although it hasn’t panned out in trials as well as galantamine, some experimenters have found it effective.

Galantamine takes 48 hours to completely clear out of the system. If taken everyday, its effects will rapidly diminish as tolerance and desensitization occur. Ideally, once every couple of days is best for this protocol. There are ways to shorten this cycle of sensitization discussed by Yuschak in the resources section.

The REM Rebound and Serotonin

Raising acetycholine levels at the right time is very powerful, but combining this technique with a serotonin protocol creates a synergistic effect. This combination gives over an 80% chance of triggering a lucid dream. Granted these aren’t controlled, double-blind studies, but many skeptics, nevertheless, have been shocked by just how well this actually works.

Acetylcholine switches on wakefulness and dreaming while serotonin switches them off. A natural amino acid called 5-HTP, which is higher up the chain of precursors in production of serotonin (e.g. tryptophan converts to 5-HTP which converts to serotonin) is more effective for this purpose than tryptophan.

Taking between 100-150 mg of 5-HTP before bed has several beneficial effects. It helps get to sleep faster and increases the quality of deep sleep cycles. It suppresses the short REM cycles in earlier phases of sleep and creates a rebound effect, intensifying the later and longer REM cycles. It’s absorbed quickly, peaking in 90 minutes and clears from the system largely within about 6 hours.

A couple of caveats with 5-HTP, however: donâ€™t take it with vitamin B-6. There is evidence that this may synthesize serotonin in the gut rather than the brain and serotonin created this way doesnâ€™t pass easily through the blood brain barrier. Also be careful tweaking serotonin if you are already taking anti-depressants or MAO inhibitors, including natural inhibitors like St. John’s Wort, which could amplify the effect. MAO inhibitors also mess with dopamine and norepinephrine which may interfere with the protocol.

These two supplements (three if you count choline) form the core protocol. In summary:

While this protocol has proven very successful, there are more options to tweak. See the forums on LDS (Lucid Dream Supplements) or Yaskuvâ€™s material for more detail if this approach interests you. One study, for example, found a combination of amino acids (2000mg L-aspartic acid, 4000mg L-glutamine, 300mg L-Theanine) taken the same way as galantamine resulted in a 100% success rate —although the number of trials was small.